Our Quote of the Week reminds us that we cannot celebrate a true "independence day" in the United States until all people can enjoy liberty and self-determination. Independence was not fully achieved on July 4, 1776, and many are still struggling to achieve it 52 years later.

Sargent Shriver was US Ambassador to France when he spoke these words in 1969 at the tomb of the Marquis de Lafayette. In his address, he makes a point that some still deny today: that July 4, 1776 does not represent the beginning and the end of the quest for independence for the people of the United States. While the promise of liberty and self-determination was articulated in our founding documents, in reality the only people for whom this promise was meant, were the White men of the colonies. This left everyone else with few or no freedoms, even as our population grew and became more diverse.

Sargent Shriver emphasizes that the struggle for independence is global, "in nations whose people are not free and within free nations where the few do not share the opportunity of the many." In this sense, even if we were to achieve freedom and independence for all of us at home, we will never be truly free until all people, everywhere are free.

At home, our quest for independence has continued since 1776, and goes on today. For each high-profile, political, human-rights victory, from Lincoln's abolition of slavery, to Johnson's passing of landmark civil-rights laws, to the Supreme Court's securing of the right for same-sex couples to marry, there have been countless efforts on the part of regular citizens to achieve justice and equal opportunity for all of us. On Independence Day, we celebrate the efforts of the people's quest to achieve independence for everyone, so that we may finally come together as intended by our motto -- e pluribus unum (out of many, one).

To honor the sentiment of many becoming one, this week we asked members of our community to join us in reflecting on this quote. You can read their contributions below.

A Conversation about Independence Day with Adam Green 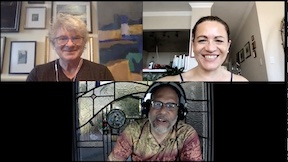 We sat down with historian Adam Green to discuss Sargent Shriver's 1969 Independence Day quote. Adam is a professor of American History at the University of Chicago, where he is also faculty affiliate at the Center for the Study of Race, Politics, and Culture, a Faculty Board Member at the Karla Scherer Center for the Study of American Culture, and a Senior Fellow at the Society of Fellows in the Liberal Arts, at the College of the University of Chicago.

Adam is a long-time friend and collaborator of the Sargent Shriver Peace Institute. If you’ve seen the documentary, American Idealist, the Story of Sargent Shriver, you will have seen Adam; he’s one of the historians featured in the film.

You can hear our conversation with Adam here.

Eric N. Ford
Director, The Choice Program at UMBC
This quote is significant to me because it shows that Sargent Shriver's thoughts echoed the framework of critical race theory. A concept that is under attack today for offering a counter narrative to the dominant stories about American history. Sargent Shriver offers an inclusive approach to the global struggle for the liberation of all people. To quote Frederick Douglass July 4, 1776 "is a day that reveals ..., more than all other days in the year, the gross injustice and cruelty to which he [enslaved African] is the constant victim."

Has the meaning of the 4th of July changed for you over time? If so, how?

Absolutely, after studying Frederick Douglass at Hampton University (an HBCU) my whole perspective on the 4th of July changed. My rationale was that if I were able to travel back in time to 1776, I would be enslaved. More importantly, my ancestors were enslaved at this point in history and out of respect to them, I stopped celebrating July 4th. You cannot change the meaning or the date. To celebrate July 4, 1776 would be an insult to those who were in bondage at that time.

The quote is both frustrating and hopeful. It's frustrating because it shows that in the 50 plus years since these words were spoken, many still don't understand the famous quote from Fannie Lou Hamer "Nobody is free until everybody is free". It's hopeful because it shows that there are allies in the struggle against structural racism, and it's through their self work and the work with their peers, that we will eventually see significant progress.

Does the quote make you want to take action in some way? If so, how?

The quote reinforces the need and importance for me to share my personal stories based on my lived experience. It is through these stories that I am able to reach and teach others. Not only my stories but the stories of the freedom fighters who came before me. Stories are like parables that touch the hearts of those who hear them. Stories can be transformational by offering a healing connection when a component of that story resonates with you. This is how you restore the humanity that has been stripped away by racism, listen deeply to the lived experiences of others and move into the heart space. To this process called Truth, Racial Healing and Transformation I am committed.

What the Trees Know

Vieve Radha Price
Founder and Co-Director TÉA Creative
Recently, I was driving through Savannah, Georgia, marveling at the old oak trees, heavy with Spanish moss, lining Oglethorpe Street. Sarge’s words about American independence were in my mind and it struck me that these noble trees embody the spirit of freedom Sarge talks about.

These trees have seen so much. I imagine many of them were present at least since 1733, when Savannah was established - some forty years before the declaration of independence.

I marveled at their sturdiness. These trees were here then and these trees are still here. In the particular way of trees, they witnessed some terrible things. And some beautiful things. In their dignity and beauty – in the strong reach of their branches - they seem to recognize this, to embrace it, and to keep on thriving.

To me, these trees embody the spirit of freedom that we strive for, that we long for. Being near them – driving by them – communicated to me a visceral sense of what it means to survive and to flourish. As we approach July 4th, I will be thinking of these trees, calling them to mind. I will be celebrating the spirit that lives in them, reminding me to pray and so work for the release of that spirit and the opportunity for all living things to thrive.